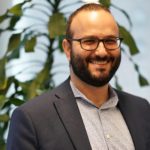 David Hershinow joined the GC community as its founding Director of the Writing Center in the Fall of 2019. He earned his PhD in English at Johns Hopkins University, where he worked at the university’s Writing Center for seven years and served as the center’s Director in his final year of study. Since completing his PhD, David has held faculty appointments at Princeton University and at Baruch College, CUNY. He is the author of Shakespeare and the Truth-Teller: Confronting the Cynic Ideal (Edinburgh UP, 2019). David is excited to bring his experience to bear on the development of the GC’s new graduate writing center, one of the few writing centers in the country whose mission caters solely to the needs of graduate students.

David can be reached at dhershinow@gc.cuny.edu

Daniel Hengel holds a Ph. D. in English from the CUNY Graduate Center. He has taught First-year Writing and English Language Literatures at Hunter College, Baruch College, Yeshiva University Stern College for Women, Fordham University, and in John Jay’s Prison to College Program at Otisville Correctional Facility for Men. Daniel studies and teaches what he affectionately terms twentieth/twenty-first century English Language Literatures of Resistance. His dissertation, “(In)Hospitably Modern: Hospitality and Its Discontents (1920 – 1953),” reorders formerly ‘hospitable’ domestic spaces into inscriptions of political resistance and social upheaval in texts by Lawrence, Woolf, Rhys, and Beckett. Daniel’s work has appeared in Nordic Irish Studies, The Wellsian, and Join the Conversation: A Guide to First-year Composition. He is currently editing two articles in the Revise and Resubmit process—one with Radical Teacher: A Socialist, Feminist, And Anti-Racist Journal on the Theory and Practice of Teaching and the other with The D.H. Lawrence Review.

Daniel spends way too much time listening to epic-fantasy novels, which he calls his “stories”—Michael Kramer is his all-time favorite narrator. Robin Miles’s work for The Broken Earth is amazing. He also enjoys hunting for Easter eggs in the MCU, swimming, volleyball, rock climbing, The Office, and playing outside. Tai’shar Manetheren.

Malkah Bressler earned her PhD in English at Fordham University where she studied 18th century trans-Atlantic literature and ecocriticism. At Fordham, Malkah worked at the university’s Writing Center, taught composition and rhetoric courses, created and hosted a series of writing workshops for graduate students, and was the president of the Graduate Student Association. During her studies, Malkah became invested in composition pedagogy and discovered a passion for assisting her fellow graduate students develop into masterful writers. Since her thesis defense, Malkah has worked in the communications departments of several nonprofits where she wrote and edited marketing copy. Even though she decided to return to the academy, she is happy to chat about her experiences.

Emily Price is a doctoral candidate in the English program at the CUNY Graduate Center. She is writing her dissertation on late medieval literary representations of melancholy and their connections to the natural world. She has taught composition and literature at Queens College since 2019. She earned her M.A. in English at the Graduate Center in 2021.

Apart from her academic work, Emily is a columnist at Unwinnable Magazine and has freelanced arts and culture writing at a number of publications. She enjoys drawing and going to live music shows, and is trying to improve her cooking skills.

For Fall 2022,  appointments are both online and in person. Please see our scheduler for availability.

See our Upcoming Online Programming to register for these and more!

Need help with the Commons? Visit our
help page Send us a message

Built with WordPress Protected by Akismet Powered by CUNY